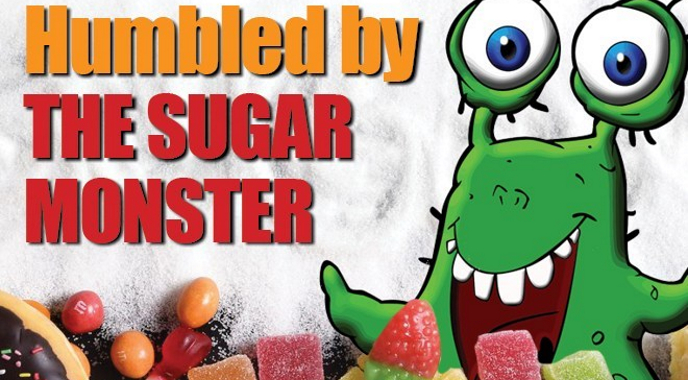 One of the most humbling moments of my life was a recent sugar fast. No chocolate or cake; no fruit (full of sugar); no bread (turns to sugar in the body); no carbohydrates (starchy veggies like potatoes and pumpkin) because they turn to sugar too. It was to be only protein and leafy green veggies. I had never been on such a diet before, and hoped it wouldn’t be too annoying.

The first day was unsettled, the second was worse and the third was full on depression, a trip down memory lane to 20 years ago. Life was meaningless and I was doomed to fail. I talked to the naturopath and she said bluntly ‘Brendan you have a slime living inside you, a fungus, a mold. It lives on sugar. When you don’t feed it, it gets cranky.’ The resentment at this manipulative parasite gave me the willpower to soldier on.

I realised all my life I had used sugar to manage emotions. Stressed? Have something sweet! But when the sugar wasn’t there all hell broke loose. This was worse than giving up cigarettes! My favourite quick fix was gone and I was left in sugar cold turkey.

After day 3 or 4 things settled down a bit. Not suicidal anymore. But very aware of my body! I clearly felt every twinge, ache, pain and knot. I was worried I’d picked up some terrible rheumatic fever, but after a day or two I realised ‘No, this is the normal sensations of the body that sugar has been filtering out’. Turns out I didn’t need to do another Vipassana retreat, just stop eating sugar for a week and the body awareness is vivid!

Ego loves sugar! It amplifies thoughts and sensations and creates an urgency that self-obsession feeds on. I have a wish, it MUST be fulfilled, NOW! No wonder our society has egomaniacs in charge, a sugar culture positively venerates them as role models.

By the end of the fortnight salad has started to taste really good. Without sugar hogging the limelight my taste buds could find delight in simple foods. My wife and I both felt better and after the diet ended our eating habits stayed changed, simply because we enjoyed the new diet more. We started back on carbs, but in much reduced amounts. And sugar is creeping back in to the diet because that’s how it goes. I’ll keep an eye on that.

It was very humbling discovering an addiction I didn’t even know I had. Very useful too; the chocolate section at the supermarket has lost much of its interest for me, and now I’m exploring the joys of oat bars. Small mindful steps, one moment at a time.